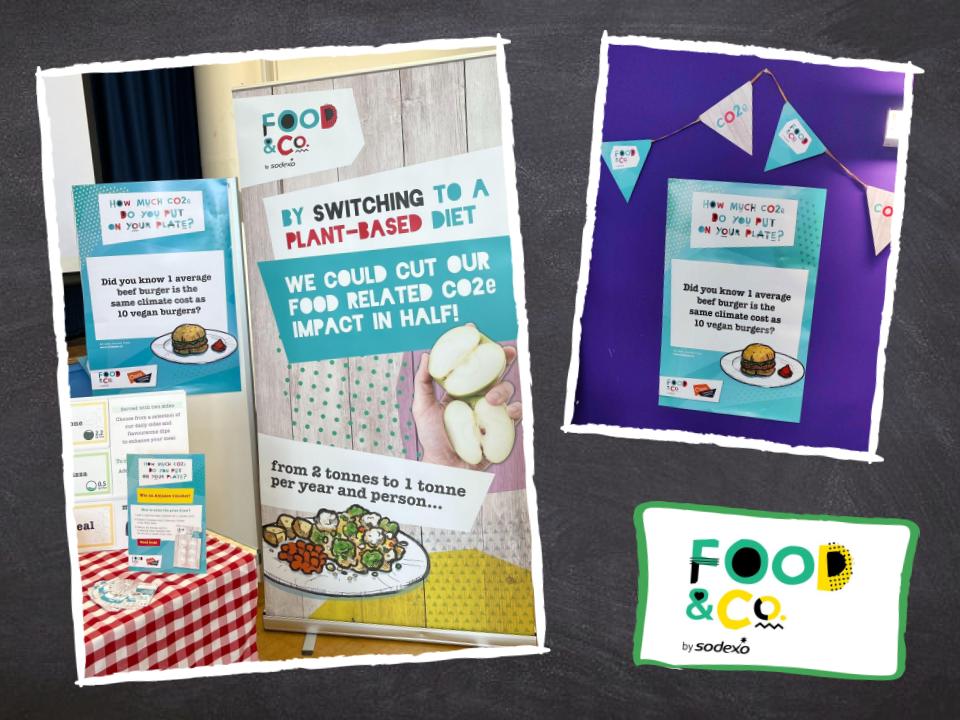 To support Sodexo’s goal to reduce carbon emissions by 34% by 2025 and to align with their ambitions to reduce emissions in their schools, Sodexo Oasis Academy has partnered with Klimato. We were charged with assessing the carbon footprint of their secondary school main course menus, to enable pupils and staff to feel empowered in their decisions and make them more climate conscious.

Two pilot sites were launched in December 2021 - Oasis Media City and Oasis Arena. After concluding a very successful pilot, ten more Oasis Academy sites across the country were introduced in May 2022. For each new site, Oasis Academy held a launch event with a stall with informative posters and a sampling session for pupils to taste a high carbon dish compared to a low carbon dish.

The Klimato team has supported the majority of the launches and been out in the schools during the events to educate pupils on the meaning of the carbon footprint labels which pupils will now see on their menus, as well as on the wider climate impact of food on the environment. The feedback from pupils and staff has been brilliant, with comments from a teacher who said, “Such an initiative is amazing in teaching the students the impact of what they eat on the environment. I might start incorporating this in my own lessons.”

The results after five months of implementing the Klimato solution have been staggering! There has been an overall shift in pupils' eating habits towards consuming lower carbon dishes from the menus. Oasis Media City and Arena initially had an average carbon footprint per meal of 0.6kg CO2e and 0.5kg CO2e respectively, which is less than the UK average of 1.6 kg CO2e per meal. However with Klimato’s help, they still saw their average CO2e per meal reduce.

Using the CO2e labelling helps pupils to make more sustainable choices and educate themselves about the carbon footprint of food more generally. We are equipping young diners to make the right climate conscious choices and encouraging them to try low carbon dishes to help minimise damage to our planet.

We have worked with Oasis to help educate its students on the impact food has on the environment.  In the dining halls we have thought-provoking food facts about high CO2e foods such as beef burgers.

Sustainability is a high priority for Sodexo and Oasis and together through initiatives like this we are helping make a better tomorrow for future generations. Opting to choose a more CO2e friendly lunch may seem like a small gesture for an individual but when people change their behaviours in large numbers it really adds up.

We are thrilled to be working with Sodexo Oasis Academy to educate students on the importance of eating consciously for our planet!